A selection of seventeen paintings (acrylic on paper) completed in 2015 at Platform Arts (Lee House) Studio in the UK (Peterlee). Each painting is A3 in scale (420 x 29.7 mm) presented as part of ‘saying hello‘ studio show set up on 03 August at the start of the two month artist in residency placement at Das Spectrum (Utrecht).

Terrific to spend a summer evening in the city at Ledig Erf watching an open air screening of Belgica (2016) Directed by Felix van Groeningen. Pleased to discover  Maureen Prins is  proprietor and director of the touring film company hired to present this screening. We, Jean and I, first met Maureen in the UK when she was a student in the 1990’s, in Sheffield. Meeting up again in her home country is very special.

Any friends with keen perception may be entertained to note that Jean and I are to be found right in the very middle of the audience, directly under the large parasol at the back nearest the bar. It is almost beyond coincidence to further discover this photograph is an independently made publicity shot we would first see ‘by chance’ at Louis Hartlooper Complex a few weeks later whilst having a meal. There is of course no such thing as coincidence. Thanks Maureen. A memorable night. 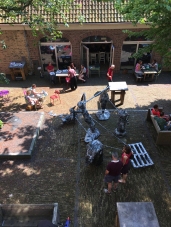 My visit to Art Gouda, on a bright summer day in June, to see the exhibition outcome of the artist residency project was a treat. The four photographs taken on site during the viewing are: a film work installation; a light and cradle installation (both located inside the former orphanage building used as the expo venue) and in the public courtyard: a site specific sculpture and the adjacent coffee lounge. Perfect. Full information about this ambitious residency project hosting forty five artists (wow) can be gleaned by visiting http://artgouda.com/. 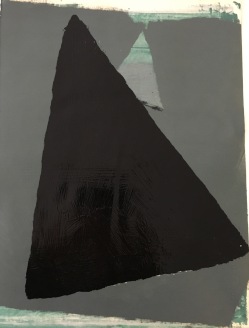 Three paintings using acrylic on paper (420 x 297 mm), thinking about how the objects in play serve to dictate the nature of the space they stand, walk or wobble about in.

Starting out at Keld House proved to be an experience of contrast. My self assumed optimism was nudged out of shape by having my application to the Art Gouda residency declined. Ouch, although it is understood that there is no such thing as a right or wrong decision. Stuff just is.

Pleasingly, in the waiting time to hear from Art Gouda I had also made an application to undertake a AIR placement in Utrecht. A phone call in the studio today asking if I would be interested in a two month residency, August and September 2016,  at Das Spectrum, was an easy ask: ‘Yes of course, I would be delighted, thank you‘… an exciting outcome. 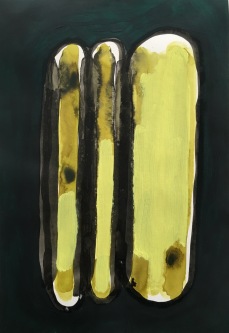 Starting out at Keld House. Three pieces made primarily with black, green and  yellow ink  (420 x 297 mm) on paper with the intention of making my actions and choices immediately indelible. No turning back.

Submitted an application for a placement with a residency programme in the Netherlands (Gouda) and need to press on with getting my ideas sorted. Soon to travel to Gouda to attend an ‘open day’ scheduled at the venue (a former orphanage) to meet with other AIR applicants and the project curators for ‘Arts Gouda’ to hear more about mutual expectations. Awkwardly the submission needed to be made in advance of the open day. 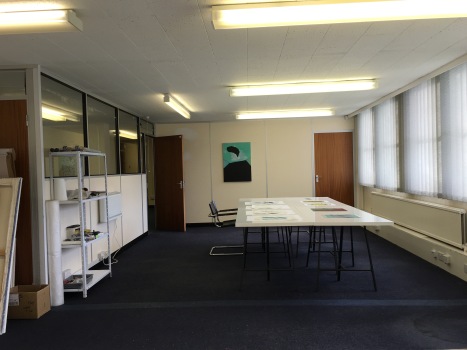 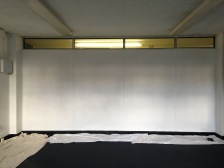 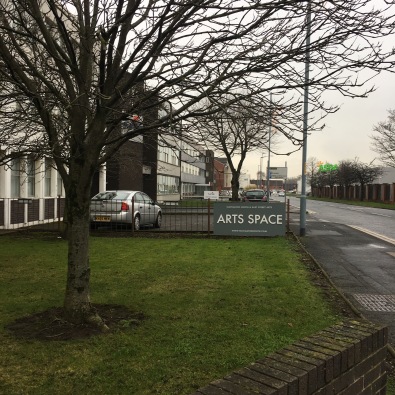 My disquiet about the loss of tenure with Platform Arts at Lee House is pleasingly short-lived and with some relief the positive outcome of my application to take tenure of studio accommodation with Navigator North (Arts Space) is a great way to start the year. The snapshots above show the location, car parking, interior working space, table space and storage. Obviously…

The impetus to work in painting is a singular conviction and necessarily contextualised by ‘when’ and ‘where’? The three thumbnail images above depict the first paintings in a series of seventeen works shown in the catalogue titled: ‘Fast Forward, Rewind and Walk On’. Electing to use printed matter seemed a more appropriate way to acknowledge the end of my tenure at Lee House in Peterlee (December 2015), a change brought about by the new landlord. The first part of the  catalogue essay references the importance of ‘place’ and is detailed below:

‘There is something very particular about making art work in a northern English town, Peterlee, inside a brutalist edifice called Lee House, a building that declares its status with utter conviction. Having worked in this studio for nearly two years the notice to quit was unwelcome. That said, this externally imposed imperative pushed me to discern the outcome of my visual intent, helped identify near misses and see new directions revealed through the process of making.

Peterlee owes its existence to the post war conviction to make new and better and was gifted its designation as a ‘new’ town in 1948. This appetite for positive social change was sustained in the UK throughout the 1950’s and celebrated in the exhibition titled: ‘This is Tomorrow’ (1956) at Whitechapel Gallery (London), emphatically declaring the intent to make a utopia for the present. The 1956 Exhibition marked a pivotal moment by involving the collaborative practice of thirty eight participants resolved as twelve groups, notably although not exclusively, including: Theo Crosby (group one), Richard Hamilton (group two), Eduardo Paolozzi and Alison & Peter Smithson (group six), Victor Pasmore (group seven) and Lawrence Alloway (group twelve). The manner and content of the iconic poster for the show: ‘Just What Makes Today’s Homes So Different, So Appealing’ by Richard Hamilton, is reassuringly progressive in its depiction. Hamilton working with a host of other artists, writers and architects aptly reflected the independence of mind that fueled momentum for the perpetual renewal of domestic living.

Peterlee today represents what could now be seen as a sustaining and sustainable ‘green’ living space albeit more recent additions and adornments to the housing stock come across as less respectful, perhaps even willfully blind, to the originating modernist ideal. Nonetheless the spirit of optimism given substance in the abstract work named as: ‘Apollo Pavilion’ (1969), is testimony to the modernist ambition of Victor Pasmore and remains in its original location in Peterlee with its significance acknowledged as a Grade II listed structure (2011). Regrettably the decision to confer listed status for ‘Pasmore’s Pavilion’ comes across as less than convincing for many local residents.’

The figure finally makes sense for me when the four studies that started out as stand alone subjects became two double panels. The sticking point of feeling ‘contrived’ has yet to be overcome. This work remains ‘in progress’.

The concern for me in this series is to situate the central motif in the space assumed by a physical object and use colour space to question its legitimacy. It matters to me that the images do not sit quietly. It is also important that the central motif offers resistance to the idea of a storytelling textual narrative. ‘Yellow Space With Object’ works particularly well for not gifting the viewer any easy ways out. I think this is to do with the painting having a bright and unremitting glare and its relation to the idea of landscape being overwritten by minimalism.

There are six works in this series, all made with acrylic on canvas at a common size: 51 x 40.5 cm. Many thanks to Ikuko Tsuchiya for taking the original high resolution photographs from which the lower resolution digital files shown above are made.